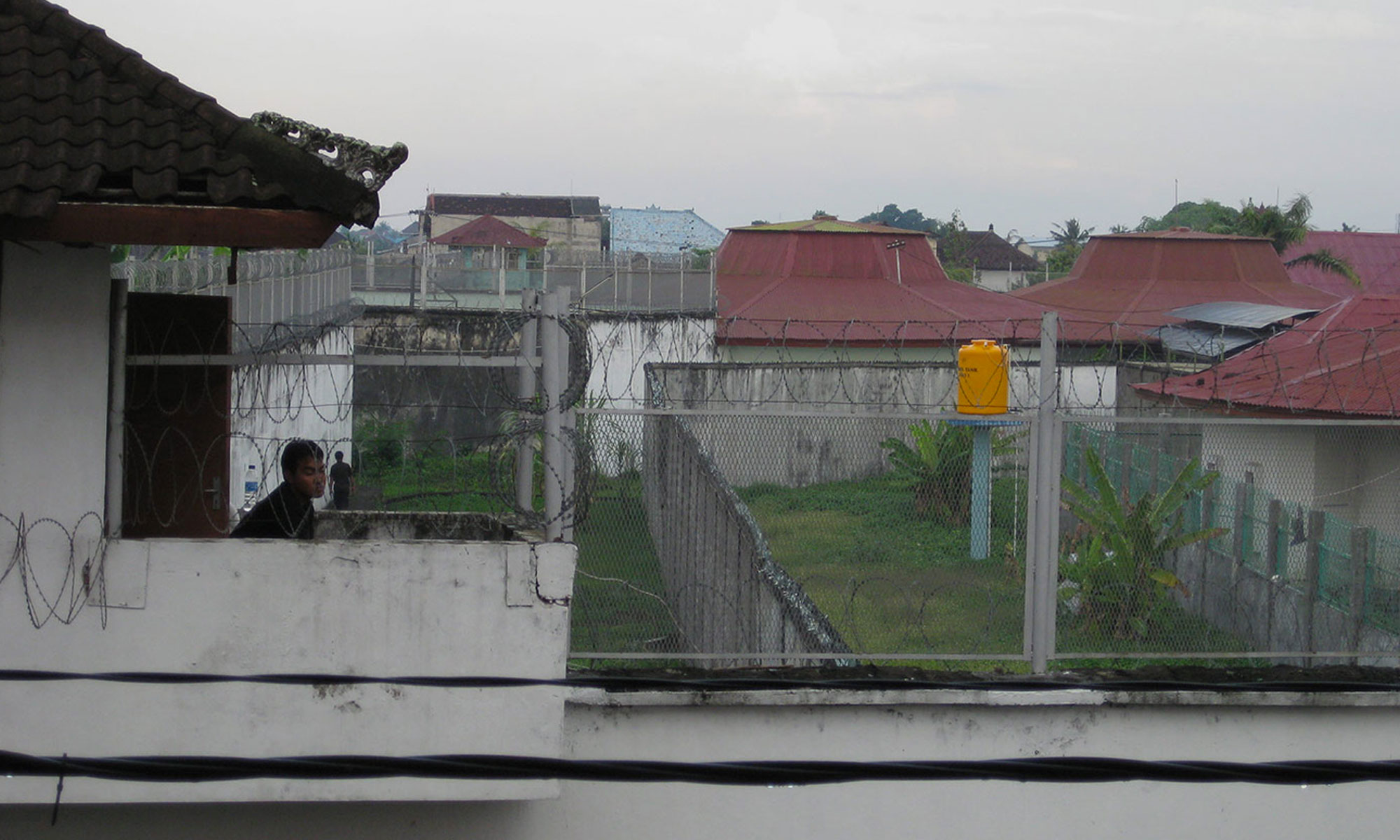 For inmates of Kerobokan life is just a nightmare Bali’s prison is a furnace of sex, drugs and brutality SATURDAY EXTRACT by Kathryn Bonella

Inside those walls, it’s a living hell; a seedy, bizarre world where the unimaginable and shocking become routine life.

Schapelle Corby barely reacted when she found a prisoner hanging by a noose.
The Bali Nine’s Scott Rush didn’t hesitate to help guards drag a body from the cell across the path from his cell; the dead inmate was covered in vomit and flies. “That’s a terrible way to die I reckon, being put in a little cell like that,” Rush says.
“Since I’ve been here, two guys have died in solitary cell . . . from tuberculosis and AIDS.”

“People couldn’t imagine what is behind those walls at Kerobokan,” a Brazilian surfer, convicted for drug possession, says. “It’s a mental camp. Inside this place, you get worse not better,” adds another Westerner doing 15 years for drugs.

Kerobokan is a dark underworld of drugs, sex, murders, overdoses, violence and filth.
It has been home to hundreds of inmates from across the world, usually doing time for drugs, and locals. There is no segregation in the mix of up to 1000 prisoners.

Psychopaths, serial killers and paedophiles live alongside petty thieves, card sharks and tourists caught with a couple of ecstasy pills in a Kuta nightclub.

When prisoners first arrive, it doesn’t seem so bad. As they walk to their cell, passing prisoners lazing under palm trees, groomed gardens, a Hindu temple and a tennis court, the place resembles a cheap Balinese hotel. Things turn when they go beyond this facade.

The women are taken through a steel door to the cramped, dirty and primitive Block W, where they stay cooped up day and night in cells with up to 15 others.
For the men, it’s more dire initially. They do a stint in an initiation cell, crushed so tightly with up to 25 others that they sleep sitting up or with their legs scissored through the bars.

The men share a squat toilet, usually blocked with faeces and stinking out the cell. Poor locals will spend months locked in this cell without being let out once.
Like any hotel, those with cash can buy a room upgrade. Westerners almost always find the money to fast-track themselves out of the initiation cells.

The price used to be about $100, until an American surfer, frantic to avoid any time in this cell, slipped the guards $900 and pushed up the cost.

Prisoners with cash can also pay to have their cells renovated. Some spend hundreds of dollars painting, tiling, building shelves and installing a Western toilet. One of Bali’s biggest ecstasy dealers, who held great power in jail by slinging the jail boss weekly wads of cash, turned his cell into something that would rival a five-star hotel room. He’d had the walls painted a light coffee colour, sumptuous Bordeaux red carpet laid, a Bose sound system installed and a large plasma television hung on the wall, which he allowed some of the Bali Nine to use to play PlayStation. He also had a fridge stocked with beers and a microwave. To expand the small cell, the inmate paid prisoners to knock down a wall to an adjoining bathroom and convert it into a private en suite.
Although this powerful inmate was left alone, many of the Westerners are blackmailed by the guards as soon they finish fixing up their cells. The guards often threaten to move them unless they sling more cash.

Almost anything can be bought in Hotel Kerobokan. The guards earn as little as $100 a month, so most are happy to boost their salaries. They arrange days out at the beach, pizza deliveries to the cell door and drug deliveries and sessions with hookers.
Savvy guards can triple their monthly income.
Depending on who is the prison boss at the time, and which guards are on duty, the strictness of the jail fluctuates. Some guards work as pimps, organising sex nights where men are allowed to bring their girlfriends in. There are times when guards also arrange hookers.

One European inmate who hadn’t had sex in jail for 2 1/2 years decided to splurge $100 to book a hooker.

He walked down the pathway to the empty cellblock and stood in a line behind eight other Westerners, waiting for his turn with the girl.

They could watch the action through a small barred window.
Across the jail, despite sex being banned, male and female inmates partake in every available nook; behind the hall, in storage rooms at the back of the hall, in the church toilet, the mosque toilet and even the boss’s office.
The jail doctor rents out a mattress in the medical clinic for sex; guards rent out their offices – as well as some of them joining in and having sex with inmate girlfriends in the women’s block.

Some guards turn a blind eye for a sling, while nastier guards use the chance to bash. A few months ago, a prisoner was bashed when guards discovered his inmate girlfriend was pregnant. Two lovers caught having sex at the back of a hall were beaten.
Prolific sexual activity often goes on in the visiting room. It’s not uncommon to see a hand jerking up and down, or females sitting with their legs splayed across a man’s lap. The women inmates have trapdoors sewn into the crotch of their jeans for easy access.

Drug dealing inside the jail is also rife. Some of Indonesia’s biggest dealers have done time in Kerobokan, and the walls don’t stop them dealing – far from it. It is a protected haven, with guards on inmates’ payrolls, working to courier drugs in and out, and phoning through warnings if police are planning a drug raid. As police do not have jurisdiction inside the jail, they need a warrant to enter, giving sufficient time for the prisoners to get a call and hide their stashes.

In June this year, 300 police gathered for a raid, but aborted it when they learned the prisoners were ready to attack.

Prisoners say Kerobokan is a money-making factory. One dealer ran a furniture factory inside the jail, receiving extra sentence cuts for his efforts.

The furniture business was a front for the ecstasy factory he ran behind it. Regularly thousands of pills left the jail hidden in speakers inside the furniture-moving trucks. No one made more than drug dealer Arman, who has since been moved to Nusakambangan Island, where Bali bomber Amrozi spent his last days. In Kerobokan Arman was earning up to $10,000 a day, selling smack and ice to clubs across Bali, as well as to hundreds of users in jail. Arman squeezed out other smack dealers from the jail market with the help of Bali’s vicious gang, Laskar.

Mention of this gang’s name to a taxi driver in Bali will get a strong reaction. Laskar is regarded as Bali mafia; its members do door security at the main tourist clubs in Legian and Seminyak. When its top eight men, including the No. 1 boss, went to prison for murder, they terrorised the jail.

Rapes, vicious bashings and killings were far more frequent. A girl walking across to a visit was gang-raped by Laskar members. Corby had bricks hurled at her in the women’s block. And prisoners were often bashed or kicked in the face for no apparent reason by some of the young recruits. The more senior gang members provided protection for the heroin dealer Arman, who would let the Westerners run up big drug bills.

If they didn’t pay, Laskar heavies would first threaten and then bash.
Dutch prisoner Aris let his bill spiral out of control without any hope of paying. He was pinned to the cell bars and beaten with sticks almost to death. He was left so badly injured that an Australian inmate went around collecting cash to buy heroin for him to smoke to ease his pain.

One inmate, convicted for trafficking 2.2kg of heroin, was found hanged in his cellblock toilet. Prisoners heard a gang member yelling at him the night before. The jail deemed it suicide. The prisoners knew it was murder.

Inmates are always looking over their shoulders but with cash, life is a bit more livable.