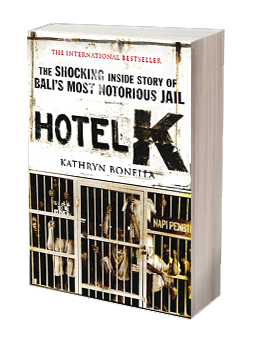 The case of a young Australian woman’s imprisonment brought author Kathryn Bonella to the terrifying Kerobokan jail in Bali’s tourist area. She returned to lift the lid on an overcrowded institution ruled by violence, drugs and corruption, writes ARMINTA WALLACE

THEY come from every corner of the world, from Brazil and India, from Italy and the US. For most of the three million or so tourists who visit every year, the Indonesian island of Bali is paradise, all palm-fringed beaches and ultramarine lagoons, five-star hotels and luxury villas. But the place they call “the island of the gods” has a very dark heart indeed. Sitting on four hectares of prime real estate in the tourist area of Kuta is Kerobokan jail.

The jail has also housed a succession of “VIP” prisoners, from the terrorists convicted of masterminding the suicide bombings which killed 202 people in Kuta in 2002, through a Balinese king to the brother of the celebrity chef Gordon Ramsay.

It was another celebrity prisoner who brought Kathryn Bonella to Kerobokan in the first place. A 27-year-old Australian beauty-school student, Schapelle Corby, became a cause célèbre in Australia after she was caught at Bali’s Denpasar airport with four kilos of marijuana hidden in her boogie-board bag. Despite insisting that she was innocent, she was sentenced to 20 years.

Having covered the story for the Australian current affairs programme 60 Minutes , Bonella eventually returned to Bali to ghost Corby’s autobiography – and was so fascinated by the world of Kerobokan that she stayed to dig deeper into its murky depths.

BEFORE SHE VISITED the jail, did she know roughly what to expect? “I was shocked, initially,” she says. “Totally shocked. The first time I walked in, it was daunting. Definitely. The inmates were all mixed together, so you didn’t know who was a paedophile, who was a rapist, who was a drug trafficker. And the fact that killers would walk me out to help me hail a cab, or call a cab for me on their mobile phones – that kind of thing was mind-blowing at first.”

Courteous killer doormen were only the start of it. Built in 1979 to replace a prison that had been torn down to make way for a shopping mall, Kerobokan was meant to house just over 300 prisoners, but by the late 1990s was home to almost 1,000 inmates. Many cells contain up to 25 men packed so tightly that the prisoners are forced to sit, and sleep, in shifts. Women and transvestites are kept in 10 small concrete cages. The toilet facilities range from unspeakable to non-existent, and all this in average daytime temperatures of 30 degrees.

Small wonder then that anyone who has access to money will pay to be upgraded to more salubrious surroundings. Paying for a cell upgrade can, Bonella writes, secure “private rooms with grassy views, a plasma television and DVD players, a soft mattress and the internet”.

In Hotel K Bonella describes a Mexican drug dealer called Clara, who lives at the end of a grassy path, shielded from passers-by by a bamboo screen. She has had her floor tiled blue and has installed a western toilet. Her compatriot Vincente has a 26in LCD television on his wall, a water pump for hot and cold water, and a small bath – items which would, according to Bonella, be luxuries even in local homes in Bali. These privileges were secured by payments from a rich Bali-based client of Clara and Vincente to ensure that they would not name him.

Bonella also found prisoners paying for sex and drugs. Sexual encounters of every imaginable variety were blatant, constant and barely hidden. So outlandish, indeed, are the details of these activities in the book that they border on the unbelievable. But Bonella insists that her information is accurate and that it’s backed up by research by the Bali Post newspaper, where she found many of the stories had been chronicled already. “The inmates didn’t need to embellish. The truth is graphic and shocking enough,” she writes.

She is still in touch with two of her main informants, a Brazilian named Ruggiero and an Australian of Iranian extraction called Mick. She describes these men as smart, articulate, likable and “completely civilised”. Neither, at the time of writing, knows when he will be released from Kerobokan.

But if life inside the jail is horrifying, its implications for the state of the society outside are truly catastrophic. If you get arrested in Bali, and if you have the money and you’re in the know, you can hire a lawyer who will pay prosecutors and/or judges to have your sentence reduced. You can pay to have the police turn a blind eye to your drug-smuggling activities. And if you do get busted you can pay so that the amount of drugs confiscated, in the official record, magically shrinks.

Bonella herself regularly paid small bribes to gain access to Kerobokan and other Indonesian prisons. Is there anyone in the judicial system in Bali who doesn’t take backhanders?

“Well, the fact is, Indonesia is corrupt across the board, right to the high levels of government,” Bonella says. “ It has always been known as one of the most corrupt countries in the world.”

So this spiralling corruption is a direct result of the tourist industry and the disparity between the incomes of local people and visitors? “Well,” says Bonella, “as one prisoner said to me: ‘We are the ATM machines here.’ And it’s because of the money there, and the tourism, and the expats, that drugs are there, for sure. So I guess you could say that. I think a lot of people go to Bali and see it as a beach paradise, you know. They go on their package holiday and they sit by the pool sipping cocktails.”

Inevitably, and increasingly, however, there are those who want something a little stronger to make their holiday more enjoyable. One honeymooning Italian bought a small bag of heroin by the pool in his hotel, “and bang, he was in jail and had to pay a fortune in bribes to get out”, says Bonella. “So now the judiciary and the police, and the jail too, see drugs as a way to earn money.”

What does Bonella hope might happen as a result of her exposé? “In terms of the corruption that goes on, it’s endemic in the country, so I don’t think a book on the jail is going to fix that,” she says. “But maybe to highlight the appalling conditions. I mean, you really wouldn’t want to keep your dog in there. The prisoners I spoke to were very keen to have it all exposed. One guy talked to me about the anger he felt at the hypocrisy of the system. He’s on death row for bringing heroin into Bali, and yet, he says, they sell it ‘like coffee’ inside the jail.”

Hotel K: the Shocking Inside Story of Bali’s Most Notorious Jail , by Kathryn Bonella, is published by Quercus, €13.99

FOR ONE OF THE prisoners Kathyrn Bonella met in Kerobokan jail, life is not so much Hell’s Kitchen as hell’s teeth. Ronnie, brother of celebrity chef Gordon Ramsay, has been a self-confessed heroin and crack-cocaine addict since his teens. In Bali he was caught with a small bag of heroin in a cubicle of a public toilet outside a supermarket.

“He looked sickly, but was friendly and grateful for any drinks and snacks I gave him,” Bonella reports.

The guards at Kerobokan regarded Ronnie as a potential goldmine, until they discovered that his famous brother had disowned him years earlier and was refusing to pay up for comfortable accommodation or jail privileges. Ronnie’s Indonesian lawyer promptly cut a deal with a British tabloid newspaper, releasing a regular drip of whingeing stories designed to shame Gordon into sending cash. The chef refused to be drawn, but later told a journalist that Ronnie had previously issued death threats against both himself and his children. Meanwhile, back in Bali, the allegedly penniless Ronnie was able to scrape together sufficient cash to buy his daily ration of drugs. He spent 10 months in Kerobokan and returned to the UK on his release.