Palm trees, lawns, a tennis court and room service: What at first glance looks like a cheap resort in Bali is in fact a notorious jail.

Kerobokan Prison – where sex and drugs are reportedly rampant among the 1,015 inmates who include 60 foreigners – was taken over last week by rioting prisoners after a gang stabbing.

Inmates have always lived on the edge, according to Australian journalist Kathryn Bonella, whose book Hotel Kerobokan gives a grim account of life inside.

She paints a picture of a seedy hell-hole where cash is king and the authorities have never had a tight grip. 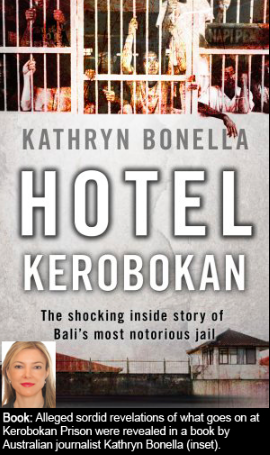 “It’s 300-percent over capacity. You can feel that as soon as you walk into the visiting area, which is shoulder-to-shoulder and stinking hot,” Bonella said, describing a prison built in 1979 for 300 inmates.

Her account is based on visits to the jail over the course of three years and hundreds of interviews with guards and current and former prisoners.

“It still is possible to get room service like any hotel: dinners brought in, beers brought in, days out are still possible despite denials by the authorities. Prisoners with a bit of cash can live a much nicer life.”

A former inmate who served four years at Kerobokan for a heroin conviction and wished to remain anonymous, said “room service” was not limited to food.

“Some prisoners ordered prostitutes brought in by paying prison staff,” he said.

During the rioting, the authorities had feared prisoners could use the 60 foreign inmates – from Australia, Britain, France, Germany, Denmark, Japan, South Africa and other countries – as bargaining chips.

But given the choice after the worst mayhem, none of the foreigners wanted to leave, saying they did not fancy starting over at a new prison.

“This is a jail where the serial killers, psychopaths and drug prisoners are all mixed in together without any segregation, where there are only 17 guards on duty at any time to control more than 1,000 prisoners,” Bonella said.

A correspondent allowed into the jail on Saturday saw around 20 prisoners scrubbing soot off the walls and cleaning up after the riots under the supervision of prison staff.

Another 500 prisoners were gathered in a hall, playing drums, singing and dancing, as part of what authorities called a “trauma-recovery programme.”

Such activities, like art classes started by a prison warden, were “PR spin,” Bonella claimed.

“It didn’t change the fact that this jail is full of violence and murders.”

Australian inmates include the “Bali Nine” who were caught attempting to smuggle drugs from the island.

On Friday, as the authorities insisted they were regaining control, Myuran Sukumaran, one of the Bali Nine who is on death row, climbed on a guard tower to chat with reporters on the other side of the prison walls.

In June 2008, Australian Schapelle Corby, serving 20 years in Kerobokan and whose autobiography Bonella co-authored, was spotted at a Bali hair salon.

With the right contacts and money, prisoners could come and go as they pleased, Bonella said, her account supported by the former inmate.

While cash-rich prisoners lived it up, penniless ones existed in squalor with not even enough room to stretch out for sleep, and pebble-hard rice to eat, Bonella recounted in her book.

Sex and drugs were common.

The prison is “the drug hub of Bali,” she added, noting that over the past few years several guards have been convicted on drugs charges and a police officer recently received five years after admitting running drugs for a prisoner.

“As long as prison guards got their cut, you were safe and could carry on with your drugs business,” the former inmate recounted.

Authorities are not bashful about what happens inside the jail.

“We are aware of illegal activities such as drug transactions,” said Bambang Krisbanu, a security official at the Justice and Human Rights Ministry.

“The priority now is to deal with the aftermath of the riot; then we will look at the other issues,” he said.

Since the riot the prison warden and security chief have been suspended and Bali’s police commander sacked.

With overcrowding a regular complaint, authorities said some 70 Indonesian prisoners were voluntarily moved to other prisons, and that others would follow.

“The initial impression of a cheap resort is why I dubbed it Hotel Kerobokan.”