Infiltrating the lairs of drug dealers and engaging them in deep discussion is all in a day’s work for journalist and author Kathryn Bonella.

The nonfiction writer who stays in Dee Why when she visits Sydney said she was fascinated by the world of drug distribution and the people behind it. “The drug world is pervasive, it’s all around us,” she said. “You just don’t know whether or not the person you’re sitting next to on a plane is a drug mule.”

Her fourth book concerning this illicit and dangerous world, Operation Playboy, was recently released and Bonella visited Dymocks Warringah Mall where she signed copies of her work.

“These drug dealers led incredibly glamorous and hedonistic lives and they want to tell their stories,” she said. “But they have to trust you. They knew I was a journalist and not a cop.

“I don’t condone their behaviour but I am intrigued by their lives. These are lives lived on the edge.”

Yet for this latest work she said she also wanted to tell the other side of the story and did this by talking to the Brazilian police chief who sought to capture the “playboys” and actively hunted them.

She said she had a box seat to both sides of this story: the playboys hated the cop and the cop hated what they did. “For me it was a balancing act,” she said.

Before books, Bonella had just spent five years working as a producer for 60 Minutes. One of the stories she worked on was the arrest of Schapelle Corby. The producer was eventually asked by the family to write Ms Corby’s side of the story.

“That changed the trajectory of my life,” she said. “I quit 60 Minutes, went to Bali and started interviewing Schapelle in jail. Together we wrote her book which went straight to number one in Australia.” 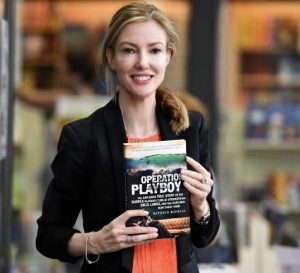 That was in 2005. Since then, her other books, Hotel Kerobokan and Snowing in Bali, have become international bestsellers.

In Operation Playboy she described the drug dealers as “adrenaline junkies”.

Yet Bonella was unsure if she was, in fact, also one of these.

“I like skiing fast downhill if that’s what you mean,” she said. “Maybe I am. I go into these vaguely dangerous situations because I’ve always loved telling really great, true stories.

“And to get them you have to put yourself among them. You can’t get them sitting in your backyard. For great stories (on this topic) you have to go to places like South America. These guys aren’t going to talk on the phone.”

"WE WERE sniffing and drinking champagne, and then this guy starts pissing me off. He…

‘Playing Russian roulette with a firing squad’: Why educated adrenaline junkies are lining up to be drug mules