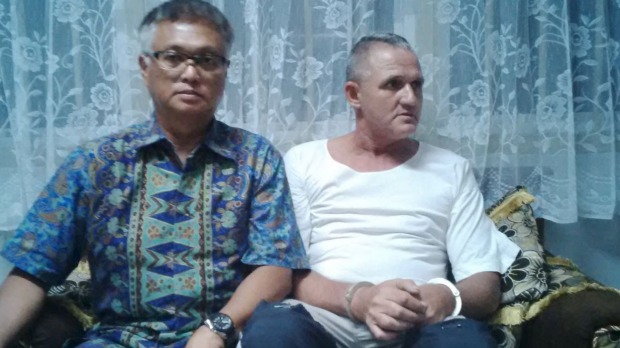 BRAZILIAN SURFER Marco Archer Moreira, nicknamed Curumin, and well known to many people in Bali and Rio for his extrovert nature and crazy sense of humour was the first westerner ever to be shot by the 12-sniper-firing squad in Indonesia in the early hours of Sunday January 18, 2015.

On the previous Wednesday night police moved Marco from Indonesia’s Super Maximum Security (SMS) prison on Nusa Kambangan Island to an isolation cell to prepare him for his execution.

Curumin, the little Indian boy, was stopped by customs at Jakarta Airport en route to Bali in 2003. He was smuggling 13.7 kilos of cocaine in his hang glider frame. But he escaped. As soon as the customs officer walked away to get a tool to cut open the aluminium hang glider frame, Marco bolted. He ran, then rode on the back of a gojek (taxi) motorbike, then took a bus and boat to Bali. Friends, many who’d invested in his coke run, tried to help him hide. They sent him off island hopping. He spent two weeks on the run, between Bali, Lombok and other islands.

As the sun rose one morning, he stood on an empty beach waving down a fishing boat to hitch a ride to another island. But, as he squinted into the glare, he soon realised his mistake. Cops with pointed guns filled the boat, leaping out and threatening to shoot if Marco made a move. He fell to his knees, hands behind his head. It was over. He’d embarrassed the authorities and now, he was going to pay with his life.

Marco was sentenced to death in 2004 but spent more than ten years in prison.

I spent quite a bit of time with Marco while working on my book Snowing in Bali. Incredibly, he always seemed upbeat. He was big-hearted, very, very funny, and a great cook. While visiting the island prison he made me a delicious steak and lasagne lunch, and got great joy out of watching me eat it, proudly telling me he’d learnt his cooking skills in Switzerland. His personality was huge and those who got to know him in the prison, generally loved him. An Italian ex-prisoner who spent several years in jail with Marco first contacted me with the news of Marco’s pending execution, saying he hadn’t stopped crying since learning of his friend’s fate.

I don’t condone Marco’s drug dealing but shooting him is barbaric. I think he and his friends in Rio always truly believed the Brazilian Government would step in and help extradite him to serve his sentence at home, given Brazil is opposed the death penalty. But sadly, his time ran out for political manoeuvres.

It boded badly for other westerners on death row In Bali’s Kerobokan Prison, where two Australians and a 57-year-old British woman Lindsay Sandiford, had exhausted their appeals against their death sentences.

Playing Russian roulette with a firing squad. Why educated adrenaline junkies are lining up to be drug mules