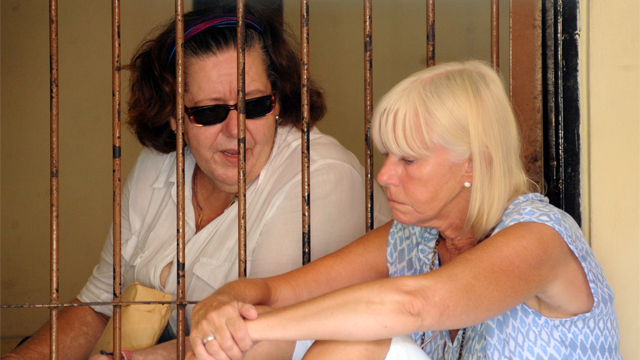 By Kathryn Bonella; Author of Hotel K and Snowing in Bali.

When 27-year-old French chef Michael Blanc was busted at Bali airport with 4 kilos of hashish in his dive tanks, he quickly told police they belonged to his friend Phillip in Bangkok. Unfortunately, his friend was unreachable and Michael was sentenced to life in prison and sent to Bali’s notorious Hotel K – where he later openly confessed the hashish was his.

Like most drug traffickers, Michael had tucked an alibi up his sleeve to rip out if his luck ever ran out – as invariably it does when traffickers tempt fate often enough.

Italian trafficker Juri Angione’s 20 to 30 streak of winning runs finished with a bang when he was busted at Bali’s airport with 5.2 kilos of cocaine in his surfboard bag. He was just 24-years old. The moment he picked up his bag from the floor of Denpasar Airport, his young life blew up.

The Italian jeweler was sent to Hotel K with a life sentence, despite emphatically stating that the bag and boards were his but the drugs in it were not.

I got to know Juri in prison, interviewing him for my books Hotel K and then later on for Snowing in Bali.

Juri talked to me about how he’d started playing the drugs ‘game’ when he was just 14-years-old student in Orbetello, Italy. He sold hashish through the school’s pizza delivery guy who’d offer a ‘special topping’ to students. Juri soon moved up among the high rollers of international trafficking and by the time he was busted at 24 years old, he’d already trafficked internationally 20 to 30 times.

K: How many times did you traffic cocaine to Bali?

K: Had you trafficked drugs to other countries?

J: Yeah. In Italy, in Holland, in India.

K: And always in a surfboard?

J: No, in a bag sometimes, in my stomach. I swallow balls. I swallow one kilogram of hash balls.

K: How many times would you have gone through an international airport with drugs – ten times?

K: Why did you get caught this time, do you think?

J: It was my time. (see more of his story and interview in the book Hotel K.)

Another Bali based trafficker (and surfer) Alberto from South America, was sure he was about to get busted during a transit stop in Buenos Aires, en route to Bali. His name was called over the loud speaker, and he quickly fabricated a story for the cocaine in his bag.

“I thought, ‘This is it. I’m gone. Oh fuck, they found it for sure.’ My heart was banging. I was looking everywhere for somewhere to run. Then I thought I’m going to just play dumb. I made up a quick story in my head: ‘I exchanged my surfboard for this bag with a guy, Pablo, and I didn’t know the shit was there.’ I would stick with the story to the end.”

Fortunately for Alberto he didn’t need to use the story, as airline staff only wanted to ask if he’d swap seats so a family could sit together.

“I was getting mentally ready to be tortured. I’d heard that’s what they did. I was just waiting for Federal Police to come. Then the stewardess comes and says, ‘Oh, excuse me, are you Mr Lopez? We have a little problem, we overbooked the plane, and
sold your seat to a family travelling together, so would you mind if we moved you to business class?’ I was thinking, ‘Thank you, god, I’m never ever going to do this again.”

Alberto flew to Bali, breezing through Bali customs with his bag of cocaine.

“I went through like a kiddy arriving in Disneyland, really happy.”

According to one of Indonesia’s biggest drug bosses only about 10 percent of those trafficking to Bali get busted. But having a bullshit story ready to spin the second they’re busted is part of the job.

So it was no surprise to those who know this game when 56-year-old Teesside granny Lindsay Sandiford quickly claimed that she didn’t know the package in her suite case lining was 4.8 kilos of cocaine. She said she only knew it was ‘something dodgy’ and that she’d been ‘coerced’ into carrying it because someone was threatening to hurt her adult son in the UK if she didn’t.

Her story is simply part of her drug dealer kit and blatantly untrue for a number of reasons.

1. I spent 18 months with Bali’s top western drug bosses while researching Snowing in Bali, and was told details about Sandiford – described as an unlikely mule; an overweight, older, dowdy English woman – long before she got the death penalty and was front page news in the UK.

2. Lindsay Sandiford had trafficked hashish to Bali and sold to the island’s drug dealers many times – some fled the island as soon as she was busted and started snitching – because she knew their names.

3. There’s no need to ‘coerce’ anyone to traffic drugs to Bali – in fact, there’s often a queue of surfers or people wanting an ostensibly easy $10k and holiday on the sunny paradise isle. It’s simply not the case that drug bosses need to coerce a person to run drugs to Bali.

4. I have details of some of Lindsay’s previous hashish deals and will be revealing these in a forthcoming article.

5. Logically, it doesn’t make sense. This allegedly protective English mother was prepared to risk by carrying a “dodgy” package to Bali where she knew there was the death penalty to prevent her son being harmed, but as soon as she was busted, she turned into an informant, helping Balinese police in a sting operation to trap some of the bosses. If her story were true, this move would have put her son in mortal danger. And, Bali police do not offer witness protection.

Sandiford’s fabricated tale didn’t help in the Bali courts where she was sentenced to death, but has won her sympathy back in England, including from the group Reprieve, which has continued to pedal her handy little story.

The truth is that Lindsay Sandiford is a seasoned drug trafficker.

MORE OF THE SANDIFORD CASE TO COME;

– Sandiford helps Bali police in a sting operation – but ends up with the death penalty anyway- why was that? The answer is simple. Bribes always win out.

– Changing heads – the domino effect of snitches – the rules Lindsay didn’t know and should have.

Last week, footage surfaced of her appearing to eat magic mushrooms with a female friend…