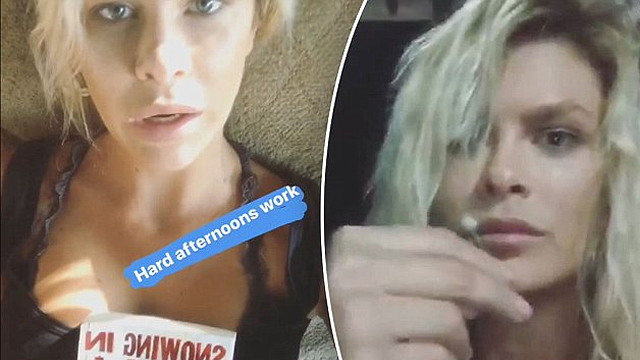 Last week, footage surfaced of her appearing to eat magic mushrooms with a female friend in her new home, Bali.

Taking to her Instagram Story, the 28-year-old flaunted the book ‘Snowing in Bali’, while captioning the video: ‘Hard afternoons work’.

Lounging around at the luxury hideaway Stonehouse, the reality TV star made an effort to ensure her 136,000 followers could see what she was reading.

‘This is how I’m going to spend my afternoon, reading,’ she said in the clip.

Megan told Daily Mail Australia on Thursday: ‘I was given the book by a Chilean man I met in Uluwatu – if anything it just shows the harms of using drugs here.

‘(I’ve) been meeting some amazing people. I’ve fallen in love like 3 times already.’ Reality TV star turned bookworm? ‘This is how I’m going to spend my afternoon, reading’, Megan said in the video, which she posted while on holiday in the Indonesian island

Last week, the ex-girlfriend of The Bachelor’s Tiffany Scanlon appeared to be eating psychedelic mushrooms in another Instagram video.

Putting on a busty display in a plunging blue top, Megan nodded her head along to the background music as she appeared to chew the substance.

It wasn’t the first time Megan’s has apparently flaunted her use of illicit substances on social media.

According to the Daily Telegraph, when responding to a question from her high school’s alumni Facebook page, she previously commented: ‘I’ve taken so many drugs I don’t know where I am… Pretty sure I’m at the supermarket though if we have to be specific.’

Megan first gained a following after her Bachelor stint last year when she tried to win Richie Strahan’s heart. Megan appears to be enjoying herself.

By Kathryn Bonella; Author of Hotel K and Snowing in Bali. When 27-year-old French chef…